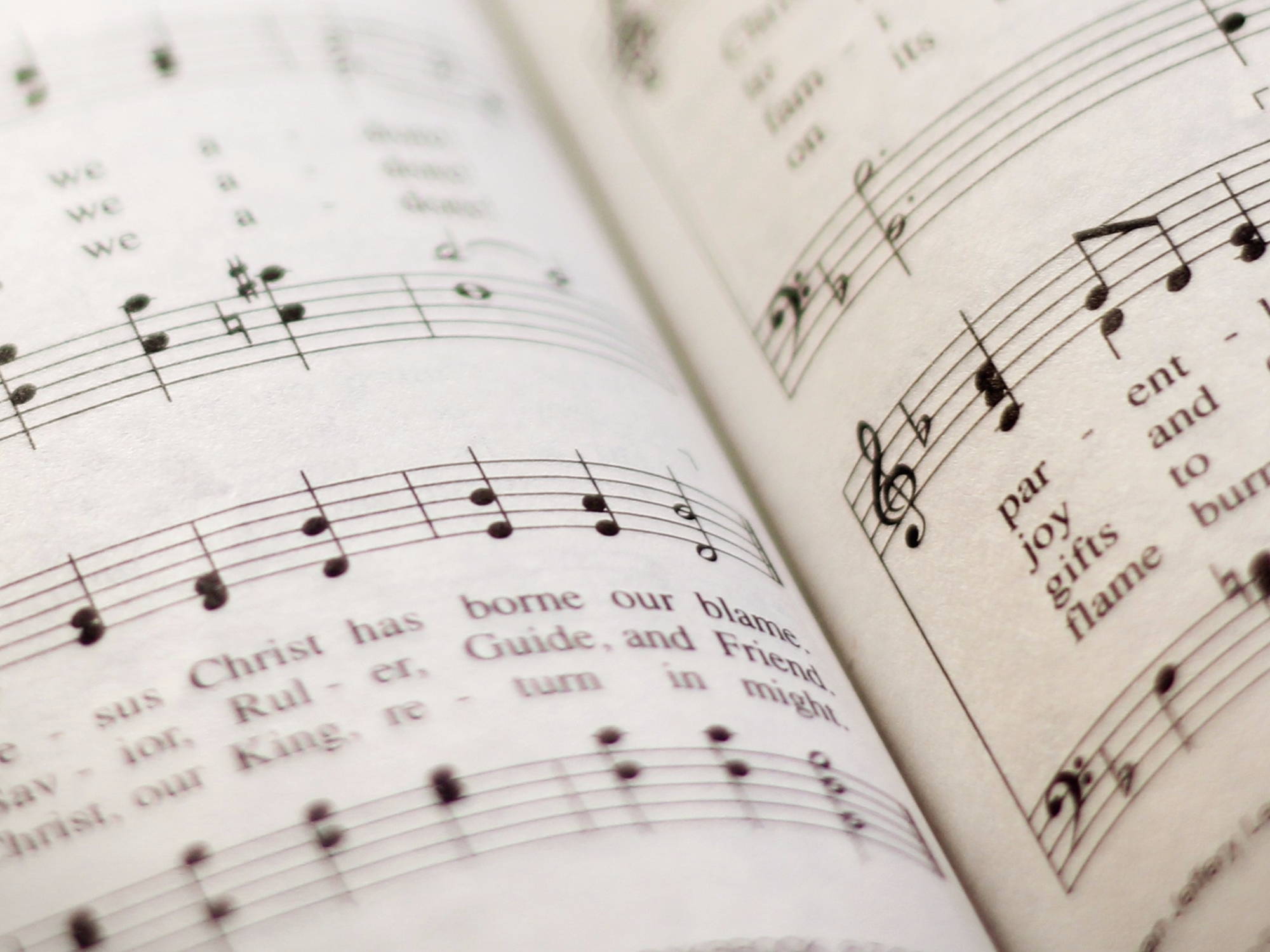 Two articles popped up on my timeline in the last couple of weeks, and if I could summarize them briefly I’d call them “anti-modern-worship.” Now, a caveat: they’re not completely anti-anything. I don’t think the authors were sitting at their desks petting their fluffy, white cat in a villainous manner thinking, “Mmm… yes, I shall now destroy those Hillsong loving hipsters and their four-word choruses…. mmm… yes… AND THEN I SHALL RULE THE WORLD WITH JOHN PIPER PODCASTS!! MUHAHAHAHAHAHA…..” I think the authors carry a genuine concern for the church and its direction in our increasingly secularized culture.

However, I think they’re missing the point of what churches like my own do on a Sunday morning, and I want to make a strong case for how modern (read: non-traditional) churches worship.

The first one I read was “10 Things I Did Not Do That Improved My Congregation’s Singing” from The Gospel Coalition, written by Scott Connell. I’ll briefly list the author’s ten points from his post:

Each point is rather self explanatory, though he explains each point briefly in the post. To be fair, there are some points I agree with, like numbers 4, 6, 8, 9. Long instrumentals disengage most congregations during worship. Worship is always better when people know the songs. Most volunteer musicians don’t have the time to dedicate to rhythmically challenging melodies, so we don’t do them very often. And yeah, worship isn’t what the whole service is about.

But there’s a subtext here not clarified by Scott Connell: your songs are theologically weak, too loud, and you’re trying to be a rock star.

Again, to be fair, I don’t think that’s where Connell was coming from. He states his purpose clearly in the third paragraph, “Here are 10 things I did not do over the past year that has helped our congregational singing…” Connell is trying to be helpful. But I think it’s too easy to glean a snarky, self-righteous subtext from his post that turns up its nose at what goes on in the first twenty minutes at hundreds of non-denominational, modern churches around the country.

Before I offer my own arguments for why modern worship is such a great thing, I want to talk about the other post I read from Tim Challies, a blogger who frequently graces the pages of The Gospel Coalition but who is also a great blogger in his own right.

Once again there are some things Challies details in “Why I Didn’t Sing When I Visited Your Church,” that I whole-heartedly agree with. He points out that congregations can’t engage with unfamiliar songs or song leaders who ad-lib from the established melody. And to his credit Challies says:

Now, please don’t think I’m trying to rekindle the old worship wars. I believe there is room in congregational worship for both traditional hymns and modern worship songs. I love them both! But the way the music was structured and implemented in your church was just not conducive to congregational worship.

But his piece, like the one before it, also carries this snobbish air that says “Hymns are better and we don’t need to shut the lights off…”

Again, I don’t think that’s what Challies meant for us to hear, but his tone was a little… snarky? Condescending? I guess what I’m trying to say is that I’m just not feeling a lot of love from these guys.

So let me first give them some love and then reply to their complaints.

Guys, I gotta be honest: I both love and miss hymns. Holy, Holy, Holy. How Great Thou Art. Come Thou Fount. Wonderful Grace of Jesus. I could go on for a while. But there’s a couple reasons we’re not doing them anymore.

First, the unchurched and new believers can’t relate to them. Yes, I know there’s the milk vs. meat argument here, but I think our greatest strength as worship leaders should be to meet people where they’re at and then lead them as far as their maturity can take them. Which means that most Sundays, we’re singing songs that will make sense to baby Christians and the unchurched, and maybe one song that’s more advanced, which is occasionally a hymn.

Second, no one is making updated covers of hymns that I can teach my band. I mean, a few bands are trying, but there’s not much that’s congregational, that is, not much that people will enjoy singing along to, save those who grew up in a traditional church.

My job as a worship leader is to create atmosphere. Now, to the aforementioned authors I say that I feel you–a lot of worship leaders have gotten lost in the lights and tones and presentation and have started to feel like big fish in a small pond. I mean, I struggle with that on a weekly basis. People often come up and complement me and I simply say thank you. But then I walk a way reminding myself that I’m just a small fish in small pond. At the same time, the lights and the tones and the presentation serve a specific purpose: to draw people into the music. Because if I draw them into the music, the music is about God, and the congregation will soon be focused on God.

When God wanted to get Moses’ attention, he lit a bush on fire. It grabbed Moses’ attention, and when he drew close he noticed that the bush wasn’t actually burning. Something was different. And then God spoke.

We’re doing the same thing every Sunday. Yes, it feels like a concert. I mean it to, and I do that in order to put people at ease because they’ve all been to a concert before, just like Moses had seen plenty of brush fires while shepherding in the desert. But all of sudden, people will start to realize, “Wait… something is different here. I don’t think this is just a concert…” And that’s when God starts to speak.

The only people I’ve heard that are uncomfortable in our services (at first) are the people from traditional, hymn singing churches. (This next sentence is harsh, but I think it bears saying.) In the same way, the people who were most uncomfortable with Christ’s message were the Pharisees. To be clear, I’m not saying that people from traditional churches are all Pharisees, but I think we need to pay attention when we share similar experiences with the people who murdered the Son of God, the chief similarity being that the work of God didn’t fit into the box the Pharisees had constructed for it.

Our music is louder (but not too loud) because it makes newcomers and regular worshipers feel like no one else can hear them sing; ergo, they sing a little louder. The lights are down because it makes people focus on the music, not the other people around them, making them more focused and less self-conscious. In the long run, that means people will worship together without realizing it. We try new songs sometimes because the Psalms encouraged it, to sing a new song.

Some of this is just good old-fashioned preference, and that’s fine. What I mean is that my church’s model isn’t the right one for everybody. Other people are going to be drawn to a more traditional atmosphere, and that’s just fine. In fact, there’s a decent amount of research out there noting that millennials are feeling more welcome in traditions like the Presbyterian and Anglican Church. Which is great. Go for it. I just know that at our church, and many others like it, God has called us to engage people that won’t be drawn to traditional church, so we’re not very traditional.

Finally, church is not for us. What I mean by that is this. I’d love for all of our songs to be doctrine heavy like the hymns I grew up with. But the truth is that if you’re a Christian who’s spiritual food has moved from milk to meat, it means that you’re a Christian who can do more to feed themselves (think… podcasts, personal devotions, personal worship time, bible studies, small groups) and focus on feeding others. This means that the Sunday morning sermons might not do that much for you anymore, and that’s ok. I’ve watched a lot of Christians leave a church because they felt like they weren’t being fed when the truth was that God was calling them to start leading. If you’re a mature Christian, your question on Sunday morning shouldn’t be “What am I getting from this?” but rather, “What am I adding to this?”

It’s easy to let our differences divide us, and I think, by the grace of God, we’re leaving an era of denominations arguing over minuscule doctrinal points. The last divide is traditional evangelicals versus modern evangelicals and I hope that this post has helped clear the air a bit. No one here is the bad guy. We all need to be faithful to our call and trust that God will do two things: use us where we’re at, and help us grow to be more like Him.

Grace and Peace to all of you.

One thought on “I Love Hymns, But I Don’t Let My Church Sing Them Very Often.”