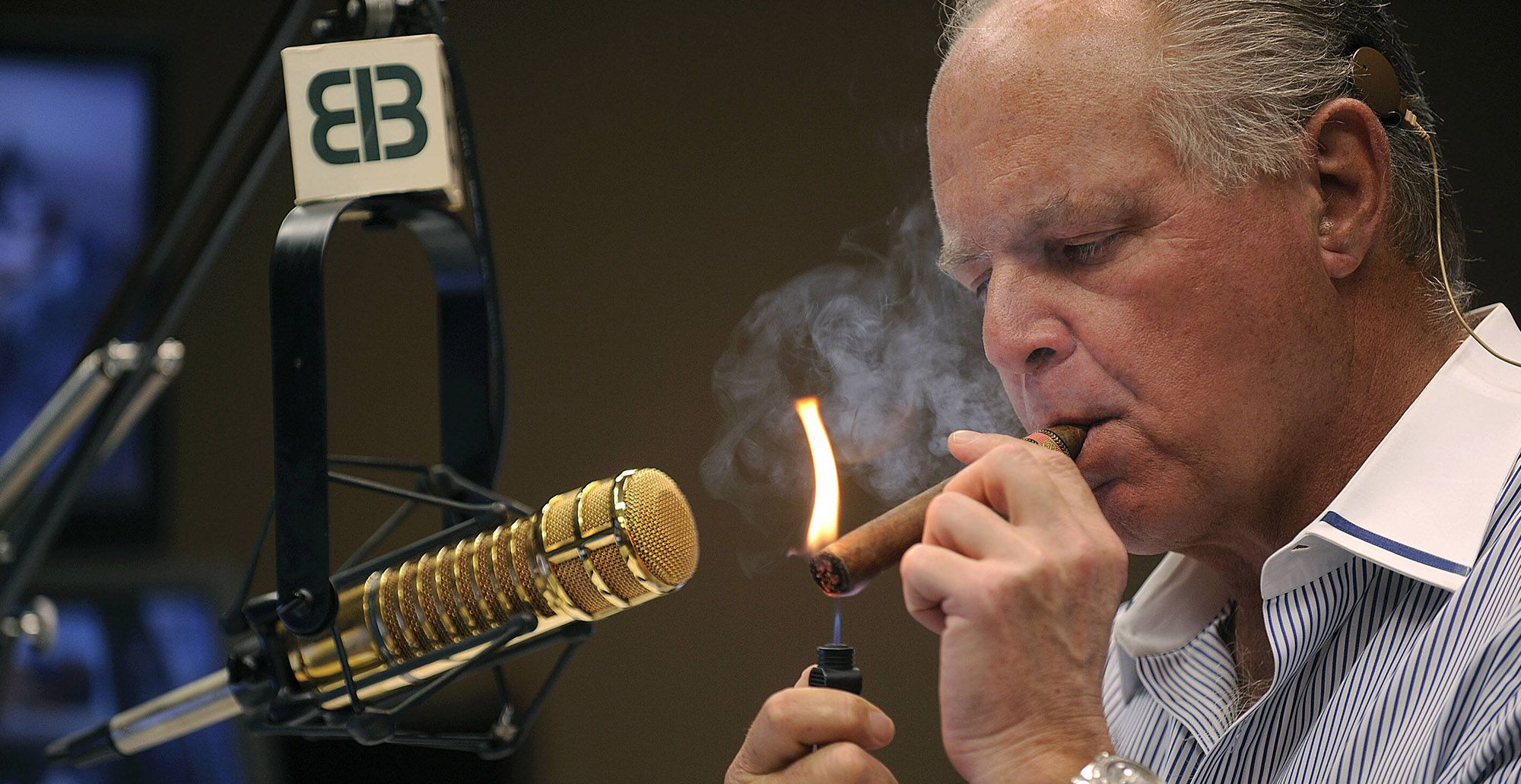 I started listening to Rush Limbaugh when I was 7? 8? Maybe earlier, actually. My dad was a bi-vocational preacher, so he spent most of his 60 hour weeks driving trucks, and his hours between 12pm and 3pm pretty much every day were spent listening to Rush in between deliveries or on long hauls across the midwest. On the occasions where I had him on a weekday and we found ourselves in the car, Rush was on.

Obviously, I didn’t get it at first. This was the mid-nineties, so I remember hearing Rush say the name Clinton a lot, and not in a good way. I remember him being especially riled up about the Lewinsky ordeal and hearing my dad bark back to the radio, or maybe he was talking to my mom, but she wasn’t listening or she just nodded in agreement, not unlike my wife does when I get ranty about politics. Whoever Rush was, my dad liked him, and I liked my dad, so I figured it was good.

I started listening all by myself during my senior year of high school. I had a co-op arrangement with the local airport–I sat at the desk and counted airplanes on mondays and fridays, they paid me money, and I gave that money back for flight training. The airport was small, so there wasn’t much air traffic, which meant that I had a lot of time on my hands in the afternoon. I listened to Rush.

I kept listening, and a few years later I found myself working as a cable guy in the small towns around Tulsa, Oklahoma. I spent a lot of time driving in my panel van from service call to service call, and I filled in that time with Rush. And then Hannity from 3pm to quittin time. And I started adding in some Neal Boortz from nine to noon. Soon my whole day was filled with conservative talk radio, and I felt myself turning into a real patriot. Mind you, this was right after the crash in ’08; the economy was in shambles, Obama had just been elected in a big blue wave, and the american ideological landscape wasn’t just shifting; it was collapsing. Especially to a guy like me who came from a country church Jesus bubble. I’m not saying that bubble was all bad, but I wasn’t too familiar with anyone who saw the world differently than my conservative evangelical upbringing.

I really latched onto those guys. Truth be told I liked Boortz the best; he was more of a libertarian than Rush or Hannity with his talk about the fair tax and all that, but I really believed pretty much everything all of them had to say. It matched what I saw as the truth growing up, and I felt a camaraderie with other listeners, a few of which were my actual friends in real life–roommates, cousins, my dad. We loved to sit and rant about big government and crazy liberals. It was fun.

I started business school in 2010 at Ferris State University. College took up a lot of my time and I had a different full time job at a factory where I wasn’t allowed to listen to anything while on the floor, so I couldn’t keep up with Rush anymore. I studied journalism, too, which I picked up because I wanted to write professionally and I figured it would hone my skills and maybe land me a writing job once I graduated. As it turns out, the university provided free copies of the New York Times, so I started reading it as way to study good journalism. Say what you want about the news media, but the gray lady is the gray lady. You don’t get to the NYT by being a sucky writer. Being a Rush-Hannity-Boortz guy, I came to the paper with a lot of skepticism. I just mostly wanted to see how the pros did what they did.

To my suprise, I found the paper to be very critical of the Obama administration. The Times clearly was not a fan of the drone program and seemed pretty distrustful of Obama’s foreign policy in general. They came with a sharpness on his Iran policy and scrutinized the never-ending wars in Iraq and Afghanistan. And the business section? Very conservative. No one was supporting socialism in there at all.

Somewhere deep inside me, I heard myself say “Hmm…”

College suprised me too. I’d been told my whole life, not by anyone specifically but by everyone in general, that college professors were mostly atheists who were out to convert unsuspecting Christian kids, so I walked to class that first year expecting to have to defend my faith with quotes from C.S. Lewis, Joshua McDowell, and Ken Ham after getting called out by professors because they would smell the belief on me. I remember feeling foreign and on edge my first few weeks of class, sort of pumping myself up for a good ol’ fashioned debate, God’s Not Dead style.

It turns out that college professors aren’t that interested in arguing with students. Maybe there’s a few somewhere that are angsty enough to want to throw down with 18-year-olds whose frontal lobes haven’t fully developed yet, but I never met one. Like me, they were just trying to get through their day with their sanity intact.

Even more to my surprise, my classmates weren’t that interested in making me an atheist either. And I guess of all the people that should have been motivated to do so, they were the ones. I say that because my degree was focused on the music industry, so my cohort was full of kids that were from that world, and that world has a lot of free sex, drugs, alcohol, agnosticism, atheism, nihilism, and fluid sexuality. It’s not im-moral so much as a-moral, wholly secular. A no-harm, no-foul worldview. Rush, Hannity, and Boortz would have called them Progressives, the worst kind of liberal other than an actual communist. At one time in my life, I would have called them heathens.

They knew I was a Christian. They knew I was a conservative Christian, at that. Yet, no one wanted to fight me. In fact, it turns out I was pretty handy with accounting and business law, so mostly they wanted my help from time to time because I was a good classmate. We all got along really well. Became friends. Good friends. Really good friends.

All this time my journalism classes were teaching me what it meant to be a good journalist. I found myself in the minority there, as well, in that most of my classmates were liberal or psuedo-liberal, and I was often the lone conservative playing devil’s advocate here and there when there was a discussion around current events. But nobody wanted my head on a plate. We were learning about the truth and how to get at it, how to document it, how to communicate it. Just the facts. The J6–Who? What? When? Where? Why? How?

Somewhere along in my junior year I had a spare minute and tuned back into conservative radio. I listened for about ten minutes and then I shut it right off. Something about it didn’t click anymore. I thought for a moment to try and put my finger on it, driving alone in my car.

That’s what it was. Not the normal news media kind of fear, because–let’s be honest–that’s part of what sells papers. Most of what makes news “newsworthy” is that it engenders some sort of fear about something. The environment, the economy, the election, what have you. No, this was different. This was fear-mongering. They were trying to make me believe that liberals and progressives and democrats were out to get me. Me and my kind. My family. My way of life. My beliefs. My religion. It was all on the table, all at stake, and only they had the answer.

And there in the car I thought about my liberal friends and how they were my friends even though I deeply disagreed with them on things like abortion and homosexuality and economic policy. I wasn’t afraid of them at all. They were nice people like me, just trying to get through the day with their sanity intact. They wanted a good job and a good living. Maybe a few kids one day. Or just a dog and a reasonable car in a reasonable home in a pleasant town.

I’m not saying there aren’t some liberals out there trying to burn things down. There are. But there’s some conservatives out there, too, doing the same thing. They attacked the capitol not long ago, a feat the crazy liberals hadn’t managed or even dared to do despite all the warnings from conservative radio to the contrary.

To top this all off, I’m a Christian. Like, a for-real Christian. Frankly, Jesus and I have more important things on our minds than the American Republic, so even if the half of America that didn’t vote for President Donald John Trump actually were out to get me and destroy my way of life, I’m called to bless those who persecute me. Jesus took no interest in the empire or freeing the Jews from Roman subjugation. He wouldn’t do tricks for Herod and he barely spoke to Pilate. In fact, he confused and frustrated his followers because he wouldn’t use his power to expand his influence. He told people he healed to keep it a secret, and he denied every opportunity to set himself up as a threat to the temple leadership. Instead, he just communicated the heart of the Father over and over and over again. Unrelentingly, recklessly, and unashamedly.

I know it’s a little different for us because Jesus couldn’t vote and had no systemic way to participate in politics. We in America do, thankfully, and that leads us into a thicket that’s hard to navigate, moreso now than ever. Neither party offers complete agreement with some of our deepest ethical convictions.

But we certainly should pull ourselves out of and away from all of the back-biting, name-calling, and fear-mongering. And if those of us on the conservative evangelical side of things are honest with ourselves, Rush did a lot of that. I can’t say it was good, and I’m not glad that I took such long, deep drinks of it.

I want to give Rush the benefit of the doubt and say that he meant well, especially at first. The GOP needed a firebrand like him, but maybe after all the money and fame and courting of presidents and senators and congressmen, he got lost, like any of us probably would. I certainly can’t side with people that are happy that he died. I wrote a while back about how people react to famous people dying, and in there I said that God wants them too, conservative or liberal. I believe God’s heart broke when Hitler shot himself just as much as it did when Ghandi died. Both passed on without having come to the resurrection knowledge of Jesus, we assume. I hope Rush didn’t. He knew a lot of Christians and hopefully he’ll be the guy that the parable of the 11th hour was talking about.

That day in the car during my junior year, I said goodbye to Rush. Hopefully I’ll be able say hello, in person, and to some of my liberal friends, too, because we all came to know Jesus together.

What a day of rejoicing that could be.